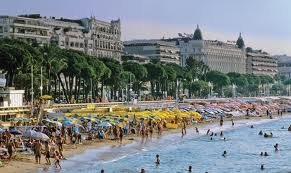 Cannes ​[kan], in Occitan Canas) is a city located in the French Riviera. It is a busy tourist destination and host of the annual Cannes Film Festival and Cannes Lions International Advertising Festival. It is a commune of France located in the Alpes-Maritimes department.
The city is also famous for its luxury shops, restaurants, and hotels.

Most visitors bound for Cannes will arrive first at Nice's Cote d'Azur International Airport Terminals 1 & 2. A free shuttle operates to link Terminals One and Two and all other transit runs out of T1. [2] From here there are a number of travel alternatives; Coach, Express Coach, Train, Bus, and Taxi. Beware that during peak season (August) transportation should be booked in advance,

Old town
The usual narrow winding streets filled with restaurants and souvenir shops. The view from the castle ruins at the top is excellent.

Covered Market (Marché Forville)
For a spectacular eating and viewing food experience, no other market in Cannes beats this for scale and variety. The market itself is at the west end of rue Meynardiers, one of the Cote's best gourmand streets.
Palais des Festivals— Down La Croisette is the famous Palais des Festivals, where stars of the screen gather and watch films screened during the festival. Irresistible not to pose for a photograph on the 22 steps leading up to the entrance.

Port
Admire the yachts of the rich and possibly famous - though true mega-yachts will be found at the International Yacht Club down the coast in Antibes.

La Croisette
Cannes catwalk beside the sea, it is the center of the city's tourist activity and known for its luxury hotels and boutique shops.

Beaches
The beaches are mostly private and cost up to €30 for a day's use (including sunbed and shade). The public beaches are crowded, and are found at the far east and west of town. If you want a quieter beach, a better option is to go to the Îles de Lérins, see below. At night the beaches can be tranquil, but watch out for spectacular fireworks displays (see posters/ask at tourist info) in the bay, get to the beach early to get a good spot!

Îles de Lérins
Two islands in the bay that are definitely worth visiting. The smaller is St Honorat, which has a monastery and ruined castle. The monks sell monastery-made food/drink products like wine which make unique souvenirs. The larger island is Ste Marguerite which also has a castle, shops, bars, and restaurants. Find a quiet cove, some shade from palm trees, and a cheap snorkel before you swim around the rocky coves. A return ticket to Ste Marguerite is €11 with ferries departing every hour roughly from 7 in the morning until about 5:30 at night - ask for a timetable. The ticket to St Honorat costs 13 EUR, and visiting the fortified monastery costs 3 EUR/pax. The timetable and information is also available in a brochure kept in most hotel lobbies.

Festival de CannesThe most famous film festival in the world takes place in mid-May every year. The worlds biggest celebrities are on hand to walk the red carpet, and thousands of films are screened in the festival and the Marché du Film, the world's biggest film market.